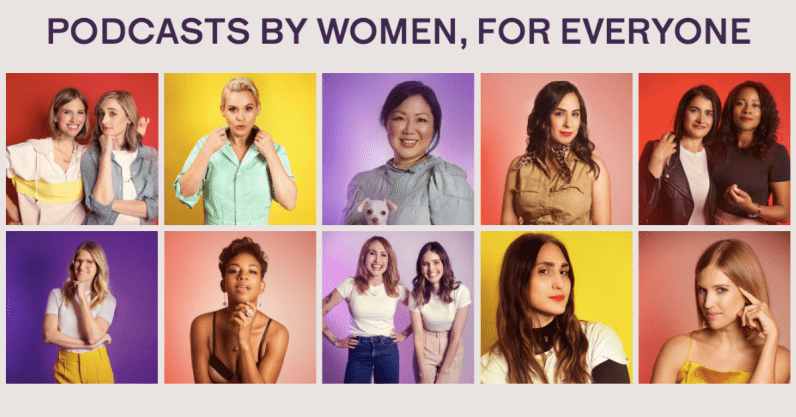 Right now, there are more than 700,000 active podcasts and more than 29 million podcast episodes, as illustrated by Music Oomph. And although there seems to be a podcast for everyone, nearly all of the networks that host, develop, and promote shows are managed by men — including popular shows like Gimlet, Crooked Media, and Earwolf. Almost half of podcast listeners are women, yet just 22 percent of the shows they listen to are hosted or co-hosted by women.

Podcasting has already shaped the way we consume media, and we can’t let it become yet another boys club. This is why Amanda Lund and Maria Blasucci, two actors and writers, along with their former agentPriyanka Mattoo, launched Earios. A podcast network run by women, dedicated to sharing content created by women, for everyone — but “no creeps allowed,” as it states on its Kickstarter page.

After raising $26,000 on Kickstarter last year, Earios launched its first three shows this week — including Filling the Void, in which host Lesley Arfin dives into hobbies and passions and interviews guests on what makes them happy. Foxy Browns concerns beauty and wellness for women of color and immigrants, hosted by Priyanka Mattoo and writer Camilla Blackett. And Web Crawlers, hosted by social media personalities Melissa Stetten and Ali Segel, explores weird things on the internet.

Earios is available on Apple Podcasts and Spotify, and plans to launch more shows bi-weekly, including an interview with comedy icon and activist, Margaret Cho.

Although some podcasts are experimenting with paywalls and subscriptions, Earios has also partnered with Acast to run ads on the show.

Earlier this year, TNW hosted an Answers session with Megan Morrone, a tech journalist and host of the weekly Twit podcast. When asked what she thought of the state of diversity in the podcasting industry, she said: “There are so many great women-led podcasts and a whole lot of them have had some very inspiring successes.”

“That said, podcasts do fall into the same gender traps as any other media and they have some new ones. A few years ago there were a lot of complaints about upspeak and vocal fry, which was just another way to criticize women’s voices. I haven’t heard much about that lately, which is a good sign.”

But having women just hosting podcast shows isn’t enough, women need to be represented in every aspect of producing a show — from in front of the microphone to running the platform. Earios is setting an example of what the podcasting industry looks like, let’s hope others follow.