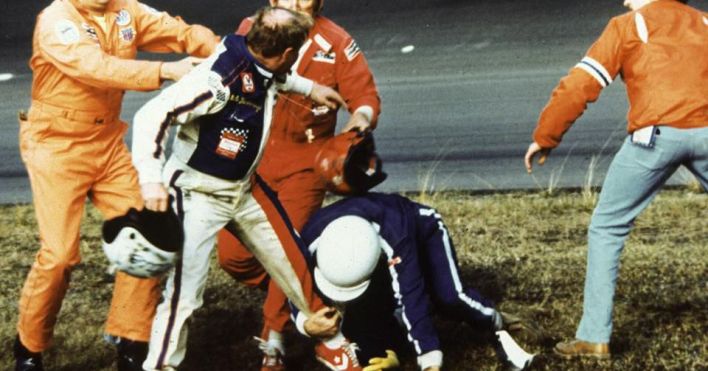 There used to be a time when NASCAR was fun. It was down and dirty good ol’ boys out racing cars just for the fun of it. Before Fox and ESPN came along and made it all about the money, most races were not televised. In the 1970s, one of the big three networks would occasionally show a race – usually one of the big ones like Daytona – but only select coverage condensed down in time.

On February 18, 1979, everything changed. CBS presented the first flag-to-flag coverage of a race in the Daytona 500. Richard Petty won NASCAR’s crown-jewel race, but it was a couple of Alabama boys who stole the show. But let’s start from the beginning.

Bobby Allison was born in Miami, FL in 1937. He began racing cars while still in high school and even raced under a fictitious name (Bob Sunderman) because he was underage. After finding success in south Florida, Allison and brother Donnie were searching for greener pastures and that led them to Alabama. In 1959, the brothers and a few other crew members moved north to race at the Montgomery Motor Speedway. Upon arrival, the Allison team promptly finished 5th, first and second in their first week in the Yellowhammer State.

To their great joy, the team found they were earning much bigger purses than what was being offered in Florida. With this good news in tow, the brothers returned home and talked friend Red Farmer into coming back to Alabama with him. The trio of racers had immediate success and quickly moved up the racing divisions. They settled into Hueytown and became known throughout the circuit as “The Alabama Gang”.

Bobby Allison was the most successful of the three credited with 84 NASCAR Winston Cup victories, fourth all-time, and numerous other wins at other levels. He raced at the top ciruit from 1961 through 1988 and won the Daytona 500 in 1978, 1982 and 1988, just edging out his son, Davey Allison, in the final one. In 1972, he was voted national Driver of the Year for winning ten races and taking 11 poles (including a record 5 straight) and again in 1983 when he claimed his only championship.

Donnie Allison began Cup racing in 1966 earning ten wins and 115 top ten finishes in his NASCAR Cup Series career. His driving career was cut short after suffering serious injuries at the 1981 Coca Cola 600 in Charlotte. He would only race fourteen more Winston Cup races from 1982 to 1988.

Red Farmer never saw the winner’s circle in the Cup series but had three top tens. He is believed to have won somewhere between 700 to 900 races at other levels. Farmer joined the Allisons in Alabama while in his 30s. It is thought he might have had a bigger NASCAR career had he gotten an earlier start.

Both of Bobby’s sons would followed their father into racing but both would end in tragedy. While practicing for the weekend’s Busch Series race at Michigan International Speedway in 1992, Clifford crashed hard in the third and fourth turns and died at age 27. Davey won 19 Cup races and had 92 top tens. He won at Talladega three times (1987, 1989, 1992). His exploits on the track made the Texaco Ford Thunderbird an iconic part of NASCAR. Sadly, he would perish at the peak of his career at 32 while attempting to land a helicopter in a nearby parking lot at Talladega Superspeedway.

THE RACE THAT MADE NASCAR FAMOUS

During the 1979 Daytona 500, Bobby and Donnie had had a fair share of paint swapping with rival Cale Yarborough. Donnie had led 93 of the 200 laps and could see his first checkered flag in the distance. Yarborough began to make his charge from second place. On the final lap, Yarborough attempted to pass Donnie but the two collided, slid up the track and hit the wall, ending both their chances at glory. Richard Petty cruised right past them to take the trophy. Donnie’s one chance at immortality ended at the hands of an overaggressive foe. The two drivers exited their cars and began to argue.

Bobby, who was two laps down, stopped to check on his brother. At this point, Yarborough ran up to Bobby and started yelling at him allegedly blaming it all on him and hit him in the face with his helmet – cutting his nose and his lip. Bobby climbed out and a fist-fight broke out, all with cameras sending live coverage to millions of eyeballs across the country.

All three drivers were fined $6,000 each but the melee turned into a bonanza for NASCAR. The race drew incredible ratings, in part due to the compelling action both on and off the track, and in part because a major snowstorm on the East Coast that kept millions of viewers indoors.

NASCAR suddenly went from a small-time southern spectacle to a national brand of must-see TV. And it’s all thanks to some good ol’ boys from Hueytown, Alabama and a scoundrel from South Carolina.