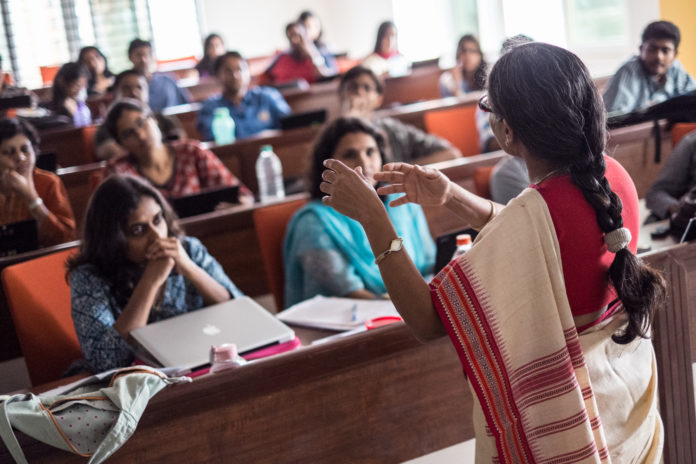 It has been observed that only one in six elementary school teachers not professionally trained, it was advised that there is a need for improvement in the budget allocation for Samagra Shiksha Abhiyan, which is currently only 2%.

The Allocation of budget for the programme 2019-20 is expected out to be Rs 34,489 crore, an increase of 10.5% from the 2018-19 budget estimate, according to a medium-term expenditure projection statement released to parliament in August 2018.

The think-tank of the government, NITI Aayog, saw teacher training as a very important tool for providing quality education all across the state. the 2018 budget speech also focussed on emphasizing on the need for professionally qualified teachers.

It was reported that only half o11-year-olds are olds were able to read Class II textbooks. Also, almost half of Grade V students cannot read Grade II textbooks and more than 70% are unable to do simple division.

The questions that raised against the Indian Education System were lack of professionally qualified teachers. Section 23 of the Right to Education Act of 2009 (RTE Act) mandates that all government school teachers should possess minimum qualifications laid down by the National Council of Teacher Education.

Even after years were given to the untrained teachers to complete their training, yet it was found that out of 6.6 million teachers, 1.1. million were untrained.

At the secondary school level, out of 2 million teachers, 14% were not professionally qualified, according to data from the education ministry.

Still, it was found that budget allocation for training has continuously declined from 1.3% in 2009-10 to 1.1% in 2018-19 (budget estimates), showing that teachers’ training has been given low priority.

According to this 2018 study by the Centre for Budget and Governance Accountability, the situation was found similar in Uttar Pradesh, Chhattisgarh, Bihar, and West Bengal, where lack of professional training is found. The school education budget has not bothered to spend a single penny on teacher’s training.

After the recommendations made by the 14th Finance Commission, states such as Bihar and Chattisgarh increased their expenditure on teacher’s training, yet it remained at 0.001% in Uttar Pradesh and 1.3% in Bihar.

Government data in 2018 revealed that more than 35% of faculty posts in DIETs were vacant. As a result, the District Institutes of Education and Training (DIET), the nodal agencies for teacher training and curriculum development, have failed to complete their responsibility.

The result revealed, by the DIET through their Teachers Eligibility Test (TET) for teacher recruitment under the RTE Act. that only 17% of 1.7 million candidates qualified as primary school teachers and 15% candidates as middle school teachers.

According to the government, they asserted the issue of untrained teachers mostly into in-service training under SSA and RMSA. These centrally-sponsored schemes only provide the running cost for refresher courses, which amounts to as little as Rs 100 per teacher per day under SSA and Rs 300 under RMSA.

The SSA is also considered to be under-funded scheme, as the allocation was not proper by the education ministry. For instance, in 2016-17, Rs 46,702 crore were approved but only Rs 22,500 actually allocated.

The Allocation of funds by the central government depends on the collections earned by education cess, and it shows more than 60% of the SSA budget has been financed through cess.