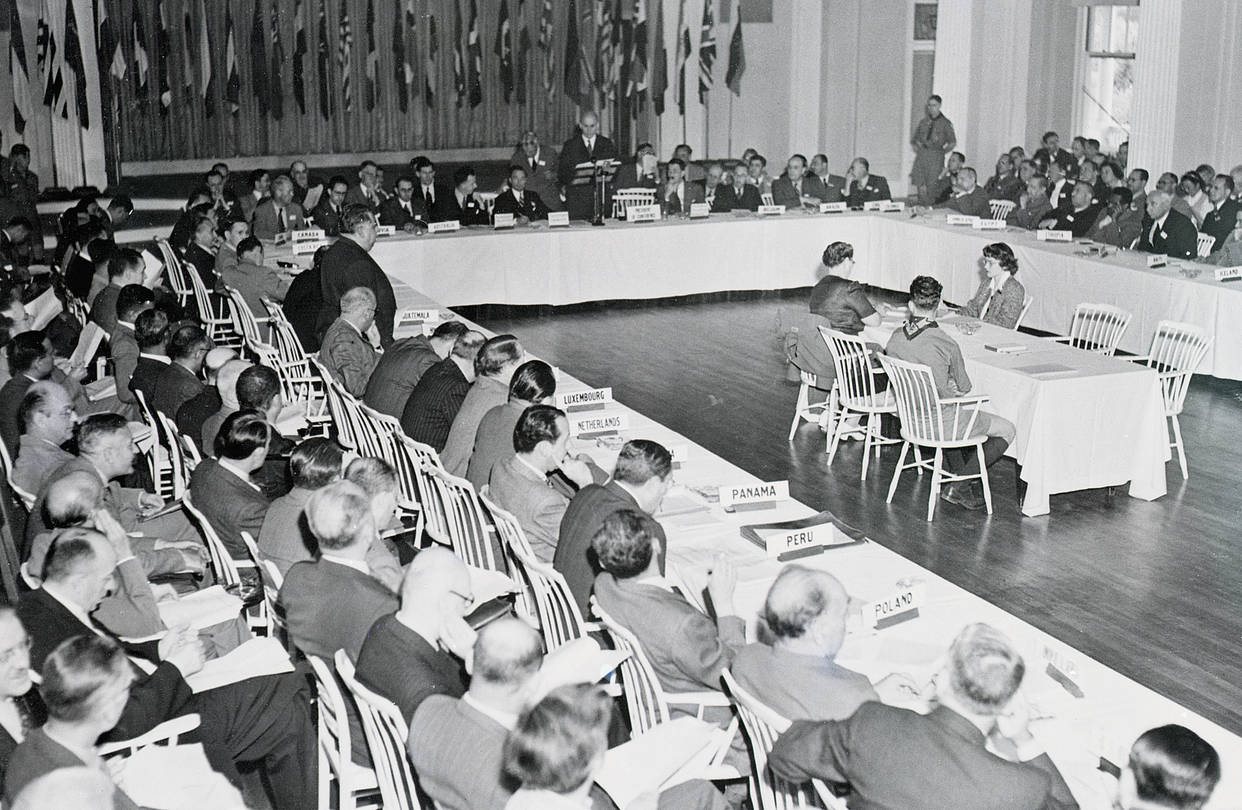 The United Nations meeting at the Mount Washington Hotel in Bretton Woods, N.H. in 1944.


In its quest to dominate global markets, China is upending the rules that make them run in the first place. Beijing’s mercantilist strategy—using revenue from cheap exports to finance railways, ports and other footholds in its client states—is disrupting the international trade system. Left unchecked, China’s tactics will continue hampering developing economies while also displacing workers in the U.S. and other rich countries.

The modern global-trade system was born at the Bretton Woods Conference in 1944, when the U.S. persuaded its developed peers to make their currencies convertible to U.S. dollars. The change boosted global demand for dollars, causing the price of American exports to rise. The overvalued exchange rate was fixed until the U.S. dumped the gold exchange standard in 1971 once claims on the gold stock had been exhausted, spiking more demand for the U.S. dollar. Since then the price of U.S. exports has risen relative to its peers, and trade deficits have become a fact of American life.

Throughout the Cold War, the dollar’s reserve-currency status was in many ways mutually beneficial for the U.S. and its allies. Developing trade partners like Japan and West Germany reaped surpluses, and the U.S. borrowed back those funds to sustain its military ventures overseas. Congress ran deficits to finance a global security fortress, while American investment banks made markets for dollar-denominated debt across the world.

Yet when the Cold War wound down and U.S. priorities shifted, American leaders failed to update that system. China had begun trading globally in 1978, and its cheap-labor advantage allowed it to dominate the world export market by the early 2000s. But the U.S. continued to borrow back the dollars it spent on imports, even though defending the free world from communism no longer topped its budget.

The degradation of America’s export prowess has continued steadily. The period from 2000 to 2010 saw a 50% spike in the U.S. goods-trading deficit and the loss of one-third of domestic manufacturing jobs. The price of industrial production has risen faster in America than in other large countries, and the offshoring of industries such as textiles, furniture and computer chips has accelerated. Well-paid 9-to-5 jobs with no need of advanced education have gone from common to coveted.

The dollar’s role as the global reserve currency has let China become the world’s factory floor. Leveraging its dominant position in global trade, Beijing has been able to steal intellectual property, conduct cyberwarfare and export deadly products like opioids. An international arrangement that was conceived of as a way to build U.S. allies into a bulwark against Soviet aggression has been co-opted by a different communist power to extract wealth from America.

There are several ways the U.S. can curtail foreign acquisitions of dollars and promote competitive pricing for U.S. exports—and it wouldn’t take a summit on the scale of Bretton Woods. First, Congress can repeal the tax exemption on income from Treasurys and other financial assets that foreign agencies like central banks enjoy—worth approximately $50 billion a year. Second, the Treasury and Federal Reserve could make it harder for foreign governments to acquire and deposit dollar-denominated assets. These measures would pressure China and other large economies to stop buying so much U.S. currency, a practice which amounts to a de facto tariff.

Some may balk at remaking a system that long funded the growth of the federal government and strengthened America’s financial sector. But blue-collar voters care more about having their jobs back. Like other Cold War institutions, the dollar-based monetary order was made to suit the time, giving U.S. allies a leg up in trade as the West faced a common foe. Today’s leaders must recognize that the benefits no longer flow to America and its allies, but to their principal adversary.

Mr. Danker was until recently a senior adviser at the U.S. Treasury Department.