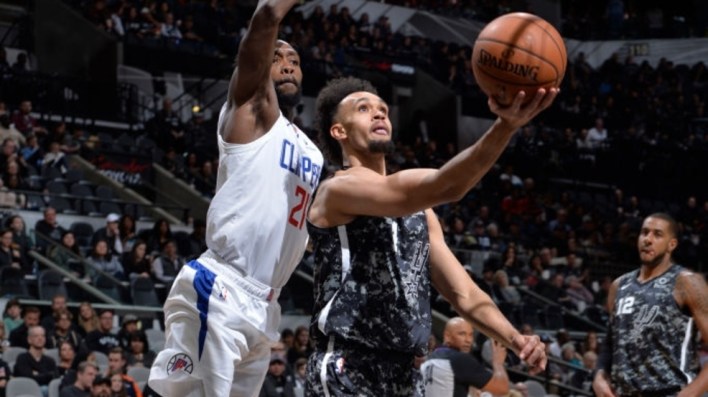 SAN ANTONIO, TX – JANUARY 20: Derrick White #4 of the San Antonio Spurs shoots the ball against the LA Clippers on January 20, 2019 at the AT&T Center in San Antonio, Texas. NOTE TO USER: User expressly acknowledges and agrees that, by downloading and or using this photograph, user is consenting to the terms and conditions of the Getty Images License Agreement. Mandatory Copyright Notice: Copyright 2019 NBAE (Photos by Mark Sobhani/NBAE)

The loss snaps the Spurs’ two-game win streak and drops San Antonio to 27-21.

DeMar DeRozan struggled on shooting going 4-16 on the night and finishing with eight points.

The Clippers (25-21) were without Lou Williams and Danilo Gallinari, but had five players in double-figure scoring with Tobias Harris finishing with 27 points on the night.

Here’s a sampling of what the teams said after the game:

“I think they (Clippers) out-executed us and out-competed us tonight in every way, shape and form. And we were sloppy with the ball on top of it, so that’s a bad combination.”

“We need to give credit to them, especially without Gallo (Danilo Gallinari) and [Lou] Williams. I think they played much better than us on offense and defense. There is not much to say.”

“Winning here, when you have that many points out, was great. I thought defensively we played great. I just thought the energy everybody played with [was big]. And every single guy that came in gave us a lift.”

“See what you do when your back is against the wall? We came out swinging and we’ve got to keep doing it. Especially in the Western Conference, where you play a good team every night.”

“I thought defensively that was where we kept going to get us this win tonight.”