A women’s march in rural Nova Scotia has nearly quadrupled in size in the two years since a handful of marchers first took to the village’s main road, charming the internet with their small-scale demonstration.

The organizers of the march in Sandy Cove, N.S., say they’re pleased that the event in their little corner of the province is helping to draw attention to the wider movement calling for the advancement of rights for women and other vulnerable groups.

“In terms of the achievements of women’s rights and equality, and ending violence against women, we haven’t gotten there yet,” said Gwen Wilson, one of the organizers.

“Until we’ve achieved those kinds of goals, there’s always a reason to march.”

About 50 people showed up to the village’s march this year, a big leap from the 15 people who turned up at the first march — one of many organized across the globe in the wake of Donald Trump’s inauguration as U.S. president in January 2017.

Wilson, 65, said many of them came from the village’s surrounding areas, with some even making the 2½-hour drive to Sandy Cove from Halifax.

While Sandy Cove, located about halfway down the Digby Neck peninsula, only has a population of around 68 permanent residents, Wilson said the people who belong to the community are still passionate about the issues that affect women worldwide.

“We’re a small, isolated community, but that doesn’t mean we’re not aware of things going on around the world, and that also doesn’t mean that there are people in our own community who could be our neighbours, who aren’t in need of help,” she said. 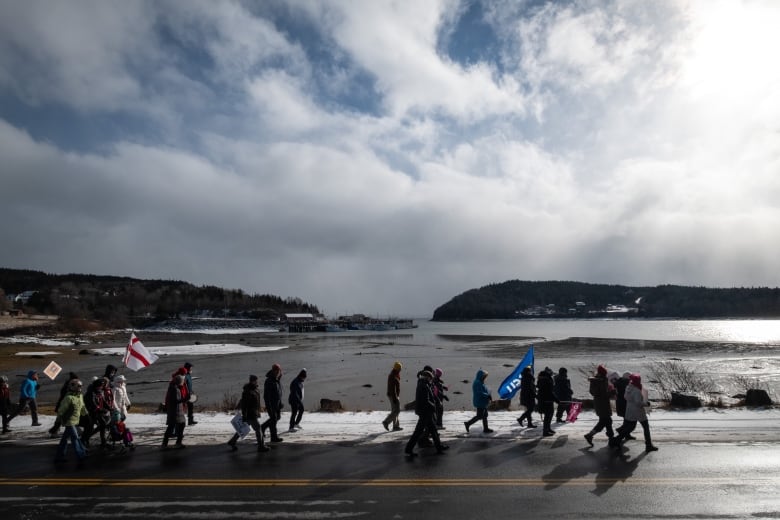 Many of the people who attended the march came from the village’s surrounding areas, with some even making the 2½-hour drive to Sandy Cove from Halifax. (The Canadian Press)

“And if you don’t recognize that a problem exists then it’s difficult to take any kind of a step to move towards a solution.”

As examples of the movement’s ultimate goals, she pointed to women’s equality in the workplace and a focus on finding solutions for violence against girls and women, especially those who are Indigenous.

A number of attendees wore red scarves to symbolize murdered and missing Indigenous women and girls as they walked along the three-kilometre route on the sunny winter day. 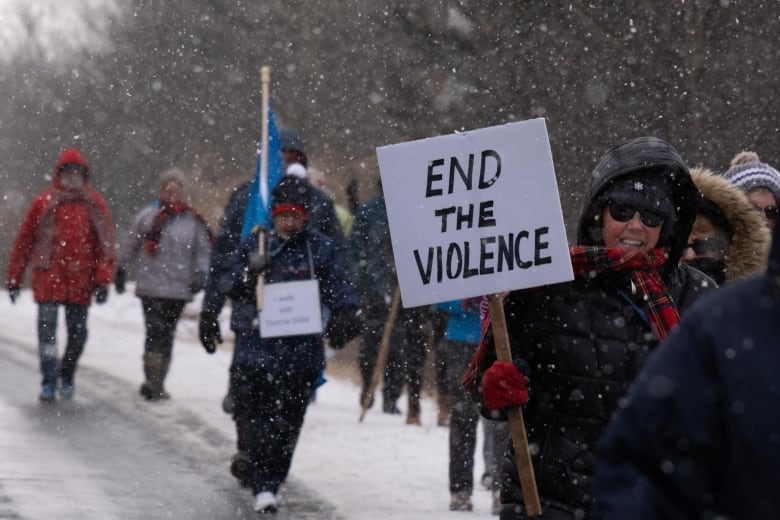 This year’s march attracted about 50 people. (The Canadian Press)

Each person who participated in a women’s march on Saturday have their own reasons for doing so, and Melissa Merritt, Wilson’s co-organizer, is no exception.

While one aspect of the women’s march is to raise awareness for violence against women perpetrated by men, she said it’s important to recognize ways in which other women can be complicit in this sort of violence.

In an interview, Merritt said she used to be in an abusive marriage, and many members of the community — including other women — turned their backs on her because of her partner’s social status. 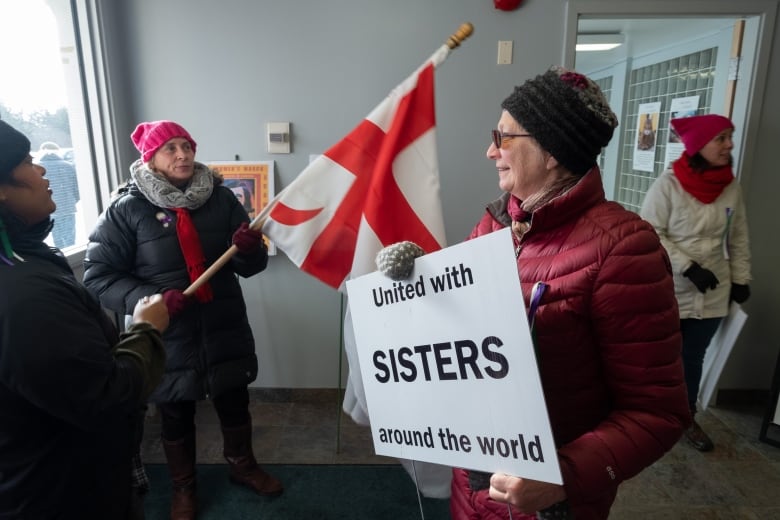 People get ready to take part in this year’s women’s march in Sandy Cove. (The Canadian Press)

“I was told by an older lady in the community at that time that we don’t call 911 here … every level that I tried to get out of there, I was never extended a hand for help,” she recalled.

“In my heart, I’m marching for women to lift other women up, and to educate the women that are telling other women that it’s acceptable to put up with this kind of stuff.”

Merritt, 45, left the marriage about a decade ago and said her life is now “completely different,” and she is now surrounded by a network of people who love and care about her. 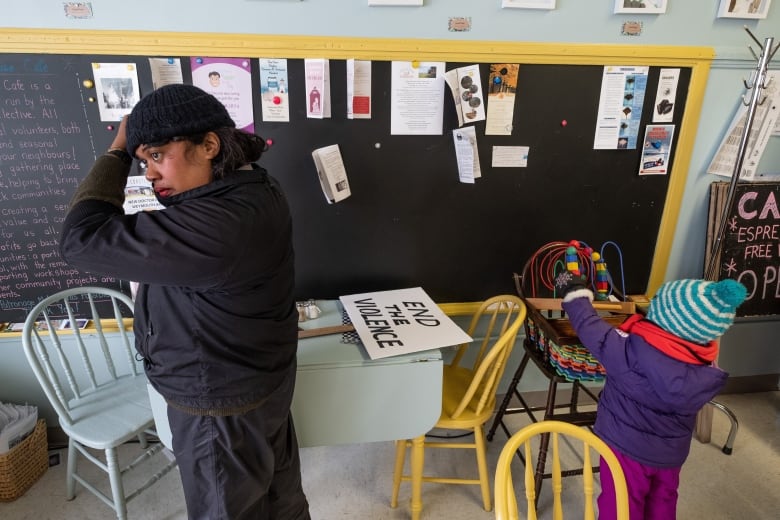 Althea Mamaril of Montreal prepares to take part in this year’s women’s march. (The Canadian Press)

She said she hopes her story will help others who may find themselves in a similar situation.

“I wish I could give anybody the words that they need to get out of that sooner. But you can’t do it until you’re ready.”

Thirty-two people attended the Sandy Cove march in 2018, and many of them wore suffragette-inspired rosettes to mark 100 years since women in Nova Scotia won the right vote.

Woman Faked Terminal Cancer And Conned Pals Out Of £8,500

Woman Faked Terminal Cancer And Conned Pals Out Of £8,500